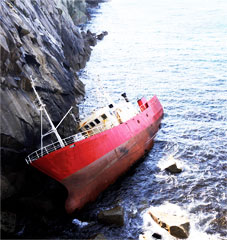 Dr Phil Anderson has received a Safety at Sea lifetime achievement award to honour the work he has done to raise safety standards in shipping. The award was presented to Anderson last night at the Safety at Sea awards, held at the Sheraton Grand Hotel during London International Shipping Week.

Anderson is a master mariner with nearly 50 years’ experience of the marine industry, was the past International President of the Nautical Institute and is widely regarded as a leading authorities on marine safety, with more than 25 years’ experience working in marine liability insurance.

“I truly consider this Safety at Sea Lifetime Achievement Award to be a great honour and I am deeply humbled to have been considered worthy of nomination,” said Anderson at the Safety at Sea (SAS) Awards. “Whilst great progress has been made – there is still more that needs to be done in some sectors of our industry. Technology and management systems will provide valuable support in the battle to make ships safer, but my own belief is that the real solutions to the problem are to be found in dealing with some basic human factor issues – when safety really will be raised to the highest priority.”

Speaking at the SAS awards, Tanya Blake, editor of Safety at Sea, said: “What has been clear throughout his [Phil Anderson’s] entire career is a dedication and passion to raising safety standards across the entire industry. His professional achievements have been notable as former director of the North Insurance Management, which manages the second largest marine liability insurance in the world. We recognise the enormous impact he has had on the sector and thank him for the work he has done and continues to do in the name of safety at sea.”

Anderson currently acts as a marine consultant and expert witness, as well as providing service to ship operators to help them manage their operational risks. He has also carried out major research for the UK government, the EU Commission and the IMO, as well as having authored the ISM Code – A Practical Guide to the Legal and Insurance Implications. He is also the main contributor to the ICS/ISF standard reference The guidelines on the application of the ISM Code.

The SAS awards received 100 entries in 13 categories, with 43 finalists shortlisted. The event, held on the 12 September at the Sheraton Grand Hotel, London, had 200 members of the shipping industry in attendance, including the Secretary-General of the IMO Kitack Lim. The awards are held to recognise and celebrate the considerable efforts made to raise safety standards in the shipping industry, both at sea and on shore. The SAS award 2017 winners by category are:

Please follow us at @IHS4SafetyAtSea  or search the hash tag #SASAwards

©2022 ConsultISM. All rights reserved.
Site by RE Media